As said in my last post i wanted a slight change in what was doing. After laying all those sleepers i wanted to do something a abit different on the layout.  So i went about landscaping the front of the module. This is important as before i can my the end plates i needed to do the contour land so i can match the end plates to it. I also need to do the end plates before i can lay the rail.
I was lucky enough to find a VR map of bendigo with survey points on it. The map was done in 1929 so its a little out of date but it was going to give me a great reference on how it was. I than set a datum point on the map which was the height of the rail bed and than worked off that to get the slopes of the land. I than scaled it down to match my layout and wrote down the depth next to each point on the foam. I was also able to use the photos i took of the area to help with how the land flowed.  I will put some before and after shots up in another post. There are many ways to workout how to get the depths right, but this is how i did it.
Click on photos to make them bigger 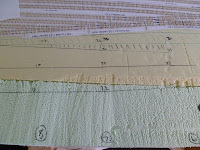 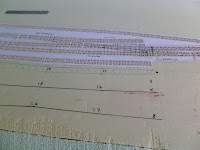 Working from the front going into the layout i slowly pushed a metal ruler into the foam to the correct depth. 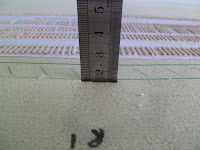 From that i than cut out channels in the foam to the depth front to back. Once that was done i than used saws and hacksaw blades to cut the foam out. I found this a great way to get the slope right. Using a hacksaw blade was really good due to its fine teeth and i was flexible to match the slope needed. 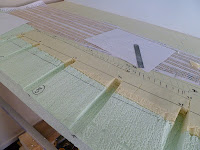 At the front of the module there will be some houses along the street front so l left the land flat but it does slope down right to left to about the middle of the module were there is a small creek/drain and than goes up left to right. From there going towards the railway the land follows the same contours but also has a slope that goes up towards the yard and than there is a step embankment to go up onto the rail height. Here are some progress shot that happen along the way. 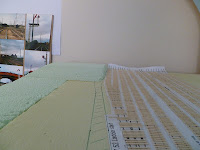 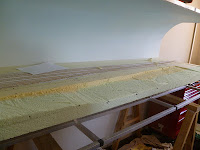 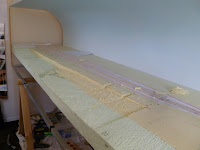 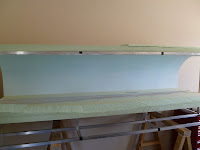 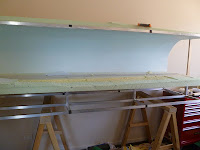 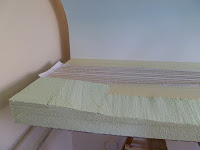 Im really happy how it has worked. It took some time to do but that was due to been careful as i wanted to get it as close to the real thing.  I still have to do the back but it has a different shape than the front and doesn't go down as deep as the front.  I still have to smooth off some areas and finish of road bridge end but it has been a nice change in layout construction. In these photos you can see the steep embankment going up onto the yard. Having some land shape really does change the look and feel of the layout and im really looking forward to when the scenery goes down and adds colour to it all. 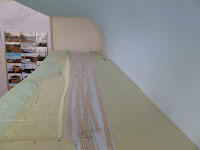 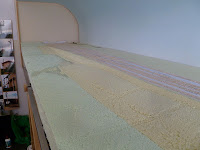 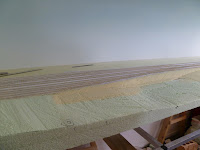 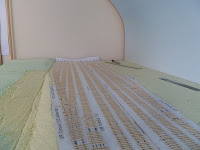 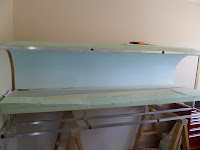 Drilling holes for the throw bar

I thought i would give a quick how to on drilling the holes for the throw bar wire for the turnouts. I plan to use servo motors to move the the turnout blades. This is done by mounting the servo under the layout with a strong wire coming up through the baseboard and foam and than connecting to the throw bar of turnout.  I good example of this is on the Tam Valley depot website. When it comes to installing the servos i will do a full how to but for now its important to drill the holes before the turnout is laid on the layout.

Its really easy to do but you do have to be careful when drilling through the foam as its really easy for the drill bit to move about. Down below are the steps.

1. Mark were to drill, you need to drill in the centre of the turnout where the throw bar is.
2. Drill a 3.5mm pilot hole slowly. Its good to set the drill on a slow speed. Drill all the way through the foam and baseboard.
3. Drill the final hole of 6.5mm. Once again drill slowly and be careful when the drill bit graps the baseboard, it can pull down on the drill.
4. Clean up the hole.


When i was laying the sleepers for the turnout i left out the sleepers near the hole as this made drilling easier. You can see in the final photo that one of the sleepers nearly covers the hole that was drilled. There is a space left for a PC sleeper to go in when the turnout is laid. I may also insert a brass tube a later date but this can be done from under the layout.

Ive also be busy forming the landscape which is making the layout look really nice. It adds so much by having hills and valleys. I will share all this in another post very soon.
Posted by Luke at 22:22 No comments:

Luke
Gembrook, Victoria, Australia
I live with my wife Laura and two dogs. Luke is a Train driver by trade. In my spare time im a fireman at Puffingbilly Railway and a member of the Yarra Valley Railway.I also like my footy, Basketball, Formula One, Aviation and anything VR.